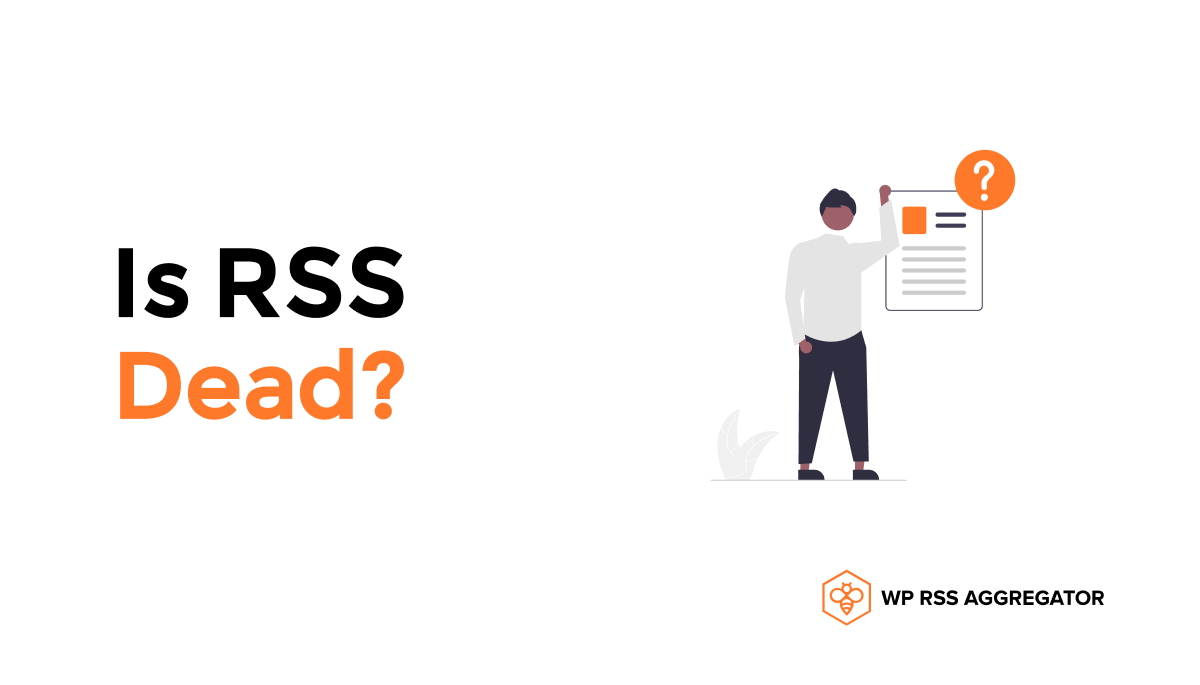 RSS has been around for a long time. But, is it still relevant in 2022?

Some people say RSS is dead. Others believe it’s still alive and well.

So what’s the truth? Is RSS dead? Is it still relevant in today’s content marketing strategies?

RSS is not dead. While its usage has declined over the years, a lot of content creators and consumers still depend on it. RSS is still a great way to stay up-to-date on your favorite websites and blogs. It also allows you to quickly and easily subscribe to new content as it’s published.

For these reasons, RSS is still an important part of many content marketing strategies. In fact, according to some marketers, RSS technology has evolved and is better than ever. So don’t count it out just yet. RSS is very much alive and active.

Yes, it is. Although the usage of RSS has declined over the years, its relevance is still strong. There are several reasons why we think so but one stands out the most; information overload.

The internet has grown bigger which means there is more information on the net than ever before. Reports indicate that about 2.5 quintillion bytes of information are created every day. A huge amount of that is on the internet.

This means that while there is a lot of information now, finding the right one easily and efficiently is a problem. That is why RSS is more relevant today than ever before. For this reason and many others, we don’t think RSS is going away any time soon.

Five Reasons Why RSS Is Not Dead

Contrary to what you might have heard, we believe RSS aggregators still plays a huge role in the way people consume news online. Admittedly, its usage has waned since the exit of promoters like Google Reader, Feedburner, and Digg Reader.

However, the technology is still very much in use. Here are some reasons why we think RSS is not dead.

It Is Still Used by Popular Content Curation Sites

Sites like Feedly, Inoreader, and Flipboard still heavily rely on RSS to provide content to their users. These sites have built up a large following by providing a great user experience and tons of valuable content.

Feedly, for instance, has become very popular. They currently have over 20 million users and are growing rapidly. Flipboard on the other hand, prides itself on over 145 million monthly users globally. That is as of early 2020.

Now, with the advent of modern aggregation tools like WP RSS Aggregator, most content curation sites are being created, making RSS even more popular. This is because these tools have become better, making RSS not only easier to use but also more attractive.

After Google Reader called it quits in the RSS business, more than 500,000 users joined Feedly within 48 hours. Two weeks later, that number had gone up to a staggering three million. What does this tell us?

Maybe the problem was with the functionality of Google Reader itself and not due to declining reader interest as it claimed. In fact, according to the developer of Instapaper Marco Arment, Google closed Google Reader because it was trying to push users to the now-defunct Google+.

The massive migration to Feedly proves that readers trust and love the convenience of RSS. For instance, the same year that Google abandoned the market, Feedly put up a paid version of their service. Guess what? They managed to raise over $500K in 8 hours after 5,000 people subscribed.

If you ask most people why they think RSS is dying, they will say it is because of social media. They will be partially right. The problem is that there is a growing mistrust in social media sites like Facebook and Twitter. In fact, 59% of US adults don’t trust the news they see on social media.

News outlets and other content providers are constantly battling against the ever-changing algorithms of these platforms. They can (and often do) bury valuable content in an instant. The thought that someone controls what you see and what you can’t, doesn’t sit well with most people.

Now, publishers and many news consumers are calling for RSS to be revived. In fact, even Google which had lost faith in RSS is going back to it again. According to a Gizmodo report, Google has incorporated a feature on its Chrome browser that lets you follow RSS feeds from different publishers.

In 2015, Flipboard received a $50 million funding round from JP Morgan. Flipboard is one of the biggest news aggregators and heavily relies on RSS, in case you don’t know. That’s just one of the many investments the platform has received.

According to Crunchbase, Feedly has also raised over $1 million in funding. This is proof enough that investors believe in the power of RSS and don’t think it is going to die any time soon. Otherwise, you wouldn’t see such huge investments being bumped into RSS-dependent publishers.

The same RSS publishers are also making good revenue from the service. With millions of active monthly users, sites like Feedly and Flipboard enjoy attractive revenue in the form of premium subscriptions and paid advertising. They also have promoted content where independent publishers pay to have more traffic sent to their sites.

Back then when RSS was still an alien concept, it was nothing more than links and incomplete headlines. If you look at sites like the Drudge Report, you will quickly get a feel of how RSS feeds used to look back then. Just a bunch of links with no discernible order.

Luckily RSS has not stayed the same over the years. It has evolved to meet the needs of its users. For example, many content creators are now using RSS to create podcasts. This is a great way to reach more people with your content. Since podcasts are becoming popular, RSS is also likely to be.

RSS is also being used to curate newsletters. Publishers can now keep subscribers updated on the latest news and content using RSS. This way, you can never run out of content to send to your subscribers. This will keep you relevant and your audience engaged.

Yes, RSS is still used today. Although its usage has been declining, its relevance has not. This is because there is more information on the internet than ever before and people need a way to quickly go through it.

What Will Replace RSS?

We don’t think RSS will be going away any time soon. However, if it were to bow out, it would most likely be because of social media. Although most people don’t trust social media information, the younger generation is not as familiar with RSS feeds as they are with social media.

The best RSS tool is no doubt the WP RSS Aggregator. It is easy to use and integrate with your website. It also comes with a ton of features that make the whole content curation process a walk in the park.

Undeniably, RSS usage has been declining over the years. However, this does not mean that it is dying or is dead. Feed readers are still relevant today and a lot of people who don’t want to get lost in the information overload still depend on them.